Home > History of the museum

The history of the museum

A regional and collectors’ museum 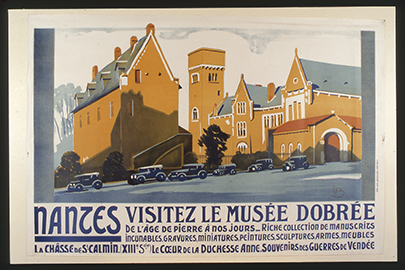 1930's poster for the Musée Dobrée

The Musée Thomas Dobrée first opened its doors to the public on 8 January 1899. It brought together the collections of two museums that wanted to preserve important collections by entrusting them to a public authority.

In 1862, Thomas Dobrée acquired the site of the episcopal Manoir (manor) de la Touche, also known as the Manoir Jean V (15th and 19th centuries). On this plot, between 1862 and 1898, he built his ‘Romanesque-style residence’ to house and showcase his art collection. This private residence was left to the Département who founded the Musée Thomas Dobrée.

The origins of the collections

The museum’s collections therefore, come from two sources. Over the years, they have grown and have become more diverse thanks to:

In 1972-1973, another building was added to the existing buildings consisting of the Manoir de la Touche (15th and 19th century), the Palais Dobrée (19th century) and the 19th-century Maison du Jardinier (Gardener’s House). This building was the ‘Voltaire building’ housing the preservation and documentation departments, permanent regional archaeology exhibits, an auditorium, underground galleries and some storage areas.

The Palais Dobrée and the Manoir de la Touche are examples of a strong and structured architecture in an area of Nantes filled with copious examples of historical monuments and heritage sites. The Dobrée site is found in a dynamic historical, cultural and commercial district of the Loire, in the west of the city, opposite the Île de Nantes, in a new district renowned for its rich cultural and creative vibrancy.

Discover the Musée Dobrée down through the centuries with these maps dating from 1850 on the following website: vuduciel.loire-atlantique.fr