170 exceptional pieces, examples of the history of Coptic Egyptian art are presented during the exhibition held at the departmental Dobrée museum from October 19, 2001 to January 20, 2002.

In partnership with the Louvre museum (Coptic section of the Egyptian department) and the participation of the musée national du Moyen Age - Thermes de Cluny, of the musée des Tissus in Lyon, the musée d'Orsay and the Union centrale des arts décoratifs in Paris, the Dobrée museum takes you on a moving journey to the very beginning of Christianity in Egypt. The journey takes you back to the end of Roman colonization in the 2nd century, all the way to the 12th century, when Muslim art and culture took over. Caught in the middle between Pharaonic Egypt and Islamic Egypt, the Coptic Egypt developed nonetheless a unique culture forged in the past but looking to the future. 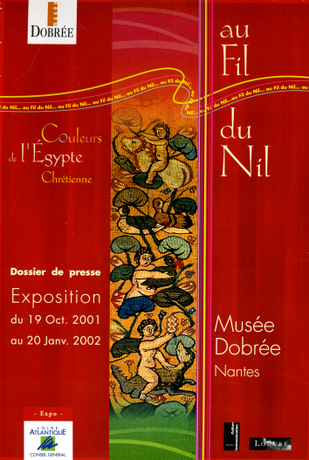 As part of the restoration of some twenty Coptic fabrics from its own collections, the Dobrée museum opens its halls to the public to allow visitors de discover and understand the art and the life of Copts in Egypt.
Their creations are presented under various aspects with one recurring theme – the weaving of modest or precious fabrics.  Textiles are the most original productions of Coptic art. Thanks to the climate and the geological conditions they were particularly well preserved and thousands of them were dug out from the Egyptian soil. If at first they were used as clothes and upholsteries, the fabrics later served as shrouds when the embalming and mummification techniques started disappearing during the 3rd century.

With this exhibition, curious visitors, whether they are amateur visitors, or researchers get to discover Coptic Egypt. A video (“Coptic Egypt, 2000 years of Christianity”), a series of conferences by curators and researchers from the Coptic section of the Louvre Egyptian department as well as weaving workshops for students and adults will allow all our visitors to learn in new, educational and playful ways. The organization Les Amis de la Haute Egypte will present contemporary weavings made in the women’s co-op of Akhmïm (Panapolis) – one of the main centers for ancient weaving techniques – underlining the importance of the Egyptian weaving tradition still present today.
Visitors will also be able to take a piece of Coptic Egypt back with them as the Dobrée museum shop will sell a series of products derived from original works – some of which come from the Louvre museum – created for this particular exhibition.