The exceptional quality of the Thomas Dobrée library allows for new discoveries every day.
With a large selection of publications on hunting, we get to see another side of Thomas Dobrée. 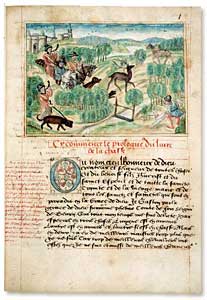 We knew him as a rich collector and a book-lover but Thomas Dobrée was also a gentleman who liked to spend his free time in his estates of Grand-Blottereau, in Port-Hubert en Sucé or of la Coutardière in Brissarthe (Anjou) and enjoyed outdoors activities including agriculture and of course, hunting.
His collection of “rustics”, as he liked to call it, was the perfect blend of his two pastimes – hunting and books – and quickly became a passion.

With the collection of the Baron Pichon, Thomas Dobrée acquired some major pieces.

His wish was that “La Tousche” – the estate he gave away to create the museum bearing his name – “… held the largest collection of books on hunting.”

As shown by the exhibition presented by Catherine Parpoil – curator in charge of graphic arts and weapons at the Dobrée museum – his wish was finally granted.

Flight hunting and hounds hunting are the subject of a fascinating study presented by major pieces, from France and abroad, such as “The Book of the Hunt” by Gaston Febus or “D’Arcussia’s Falconry” by Charles d’Arcussia.
In fact, the Dobrée library has sixteen volumes dedicated just to falconry.

Through this exhibition at the Dobrée museum, you are invited to discover exceptional, artistic books and through them a way of life that developed around the different types of hunting techniques.