2004 - Vases on a journey from Greece to Etruria

After 15 years of research on Greek, Etruscan and Italian ceramics presented in the collections of the Pays de Loire and Brittany museums, 220 major pieces (vases and clay figures, bronzes, coins) often new or reattributed, will travel to 9 different cultural sites of the West of France from January 2004 to April 2007. 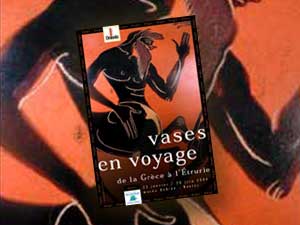 The exhibition, organized in collaboration with the University Network of the West of France, shows the influence of the work of potters and painters on the production of ceramics in the north of the Mediterranean basin. Corinth was at its center in the 7th century, then Athens at the end of the 6th and central and southern Italy as early as the 4th century.

In addition to the Greek and Italian vases, the exhibition “A taste for the Antique, china and goldsmithery in the 18th and 19th century” will present around fifty pieces that belonged to private collectors. The exhibition, with the support of the ‘Association des Amis du Musée départemental Dobrée’ (Friends of the Dobrée museum) and with the participation of the Tarneaud bank, will give visitors a chance to discover, through the eyes of private collectors, the influence of ancient ceramics and the illustrations on porcelain and gold pieces during the Enlightenment and Romantic eras.