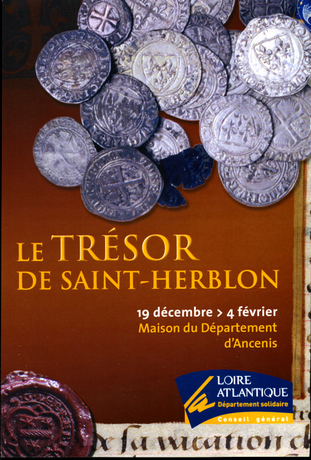 This treasure was hidden between 1389 and 1405 when the Duke of Burgundy’s troops occupied the château d’Ancenis to settle the conflict between Olivier de Clisson and the Duke of Brittany.
The treasure contains about twenty silver and copper coins. It represents a sum of 8 sols and 5 deniers, which is the equivalent of a worker’s monthly salary. It is probably the savings of a person with limited means such as a small artisan or the cash flow of a merchant doing business between Brittany and Anjou.
In 1899, during the reconstruction work of the church of Saint-Herblon that had just been set on fire, archaeological digs were conducted in the vicinity, on the assumed location of a private chapel and tomb. The medieval treasure was found during those digs. The coins are kept at the departmental Dobrée museum. The exhibition was presented at the Maison du Département of Ancenis.

The treasure’s discovery
The Hundred Years’ War
Money in the Middle-Ages
Did you find a treasure?
The publication (pdf, French)
The exhibition’s displays (pdf)