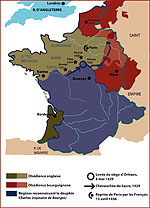 The Hundred Years’ War pitted the Kingdom of France against England. It started after a battle to conquer back Gascony, a region under the rule of the English king, Edward III. Moreover, with no direct succession to the Capetian house, the English king claimed his right to the French crown as he was the closest successor in line, on the women’s side.
The Hundred Years’ War – which actually lasted 116 years – plunged France in a series of military, political and economic wars against the English. After the successive defeats of the French kings Philip VI and his son John II, Charles V finally started to conquer back territories that the English had taken over. But Henri V won the battle of Agincourt in 1415 and annihilated most of the French nobility. In 1420, the Treaty of Troyes threatened the French crown. Driven by a strong “national spirit”, Joan of Arc led the French troops against the English. Her actions weakened enemy forces and allowed Charles VII to take back Normandy in 1449 and Gascony in 1453. 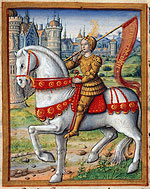 The fourth king of the House of Valois, Charles VI was crowned king of France in 1380 and reigned until his death in 1422.

Charles VI was first considered too young to reign on his own and later suffered from madness, making him a weak king to the French kingdom. He was assisted by his uncles, the Dukes of Anjou, Berry and Bourbon who fought each other for more power. The civil war that started in 1405 and the French-English conflict that resumed in 1412 put a definitive end to Charles VI’s reign. With the treaty of Troyes, Charles VI had to disinherit the future Charles VII and give power to Henry V of England instead. Charles VI “the Mad”, died in 1422, leaving his throne to his son Charles VII nonetheless.