The discovery of the treasure of Saint-Herblon 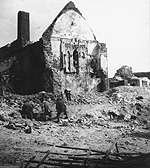 In 1899, during the reconstruction work of the church of Saint-Herblon that had just been set on fire, archaeological digs were conducted in the vicinity, on the assumed location of a private chapel and tomb. The medieval treasure was found during those digs.
The treasure, hidden between 1389 and 1405, contains about twenty silver and copper coins. It represents a sum of 8 sols and 5 deniers, which is the equivalent of a worker’s monthly salary. It is probably the savings of a person with limited means such as a small artisan or the cash flow of a merchant doing business between Brittany and Anjou.

It is difficult to know exactly why the treasure was hidden. However, we know that the region was the stage for the opposition between Olivier de Clisson and the Duke of Brittany, John IV. In fact, in 1394 the duke of Burgundy took his quarters at the château d’Ancenis when he was sent by the King to bring back peace. Perhaps the coins’ owner was afraid that the soldiers would take his money…

The seal of a T. Lebrebieus was found near the coin collection, indicating that he might have been their owner. Unfortunately, we know nothing of this man.

During the same digs, another coin was found, a semi-plaque representing Philippe the Good (1430 – 1467), duke of Burgundy and count of Flanders, but it is unrelated to the treasure.

The treasure mostly contained blancs, also called “guénars”. They are coins that are worth 10 deniers and are easy to recognize because they bear France’s coat of arms on the obverse. Those coins were minted between 1385 and 1417, during the stable monetary period under Charles VI’s reign.

The first mention of the discover of Saint-Herblon’s treasure appears in the report by the Nantes and Loire-Inférieur Archaeological Society in 1901 (article by Léon Maître, presented below)