Home > History of the museum > Exhibitions at the Dobrée museum > 2005 - Sabioneta, cité idéale

Exhibition presented from October 15 to January 9, 2005

During the Italian Renaissance era, the Duke of Mantua, Vespasiano Gonzaga Colonna, founded the city of Sabbioneta in 1558, on a bank of the Po River. It was an attempt at creating a practical “ideal city” using the urban planning ideas of the Renaissance. By 1577, the city, with its perfectly ordered perpendicular streets and its main square, was completed – except for the Theater, which was finished in 1590 – and became the new headquarters of the Duchy. 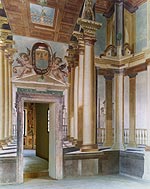 The exhibition “Sabbioneta, an ideal city” displays photographs by Jean-Christophe Ballot, an architect and photographer. His prints show a city where what exists and what is only imagined blend and become one.

The exhibition was presented between October 15 and January 9, 2005