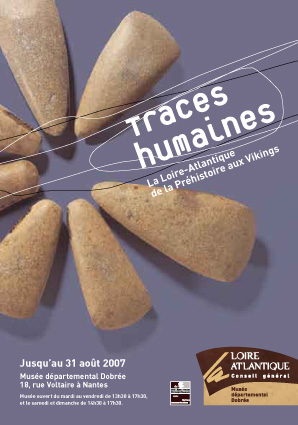 The exhibition “Loire-Atlantique from Pre-Historic times to the Vikings” presented a panorama of the human adventure that took place on a unique territory characterized by its estuary and the ocean, it showed the obstacles that migrating populations had to overcome and the roads that all influential powers travelled.
2,800 objects, among which 600 have been restored for this instance, illustrate the history of Nantes and the department, from the beginning of time to the year one thousand.
The museum obtained from the Pays de la Loire regional Archaeology Department and the city of Rezé, temporary loans of numerous objects that had until then been kept in storehouses. Individuals have also generously contributed to this exhibition.

An exhibition for all
Numerous collaborations
A summary of the exhibition (pdf, French)