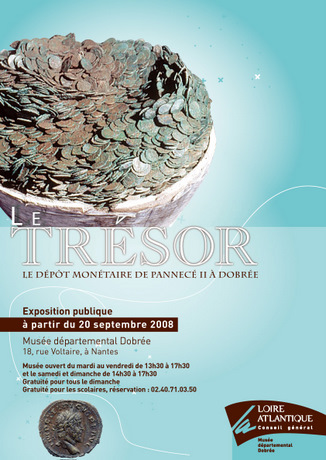 The impressive volume of this discovery makes it the most important coin collection ever discovered in Loire-Atlantique and in the Pays de la Loire region. But the originality and the greatest appeal of this treasure lies in the micro-search of a vase full of coins, to analyze its filling, it lies in the presence of local imitations that give us new clues on the coin flows under the “Gallic empire” and it resides in the exhaustive study that will allow for a fast publication of the collection.

This major discovery in departmental and regional archaeology has been saved from dispersion thanks to its acquisition by the General Council of Loire-Atlantique for the Dobrée museum, with the help of the Loire region FRAM (Regional Acquisition Fund for Museums).

A summary of the exhibition (pdf, French)