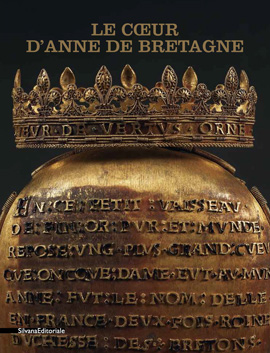 Famous for having been the Queen of France twice, Anne of Brittany (1477-1514) was also the Duchess of Brittany. During her lifetime, she witnessed the union of Brittany and France and other important European historical events. The 5th centenary of her death was an ideal opportunity for the Musée Dobrée to offer the public the first ever monograph published on the exceptional piece of jewellery that enclosed her heart.

A collective publication, Le cœur d'Anne de Bretagne brings together historians, restorers, curators and engineers in an attempt to expose the different aspects of the burial of Anne’s heart. Burying the heart was a common royal custom but was a particularly splendid affair in the case of Anne of Brittany. This book explores the physical and artistic characteristics of the funerary relic and places it within the context of artistic production in the French and European courts at that time.

The catalogue was published to coincide with the exhibition on the same theme held at the Château de Châteaubriant in the summer of 2014.

Where can I buy this book?

In bookstores and at the gift stores of La Garenne Lemot (Gétigné), the castles of Clisson and Châteaubriant.

The application showing the reliquary of the heart in 3D!
Anne of Brittany, the first ‘media’ queen?
L'exposition de 2014 au château de Châteaubriant
All our Publications